A Limit on Goal Tracking in the First Nine Months

Limits on performance are important because they provide clues about the nature of the underlying processes.

To explain this I have to step back and show you something interesting about adults when they perform, and when they observe actions.
Performing actions (e.g. stacking blocks): you don't look at your hand but at the block it will pick up, or, when holding a block, at the location where it will place a block. That is, in acting the eyes move just ahead of the action.
\citet{Flanagan:2003lm} showed that the same pattern occurs when adults observe another acting. In observing an action, the eyes move just ahead of the action.
This proactive gaze is important for our purposes because it can reveal goal-tracking ...
\citet{Flanagan:2003lm} showed that ‘patterns of eye–hand coordination are similar when performing and observing a block stacking task’. 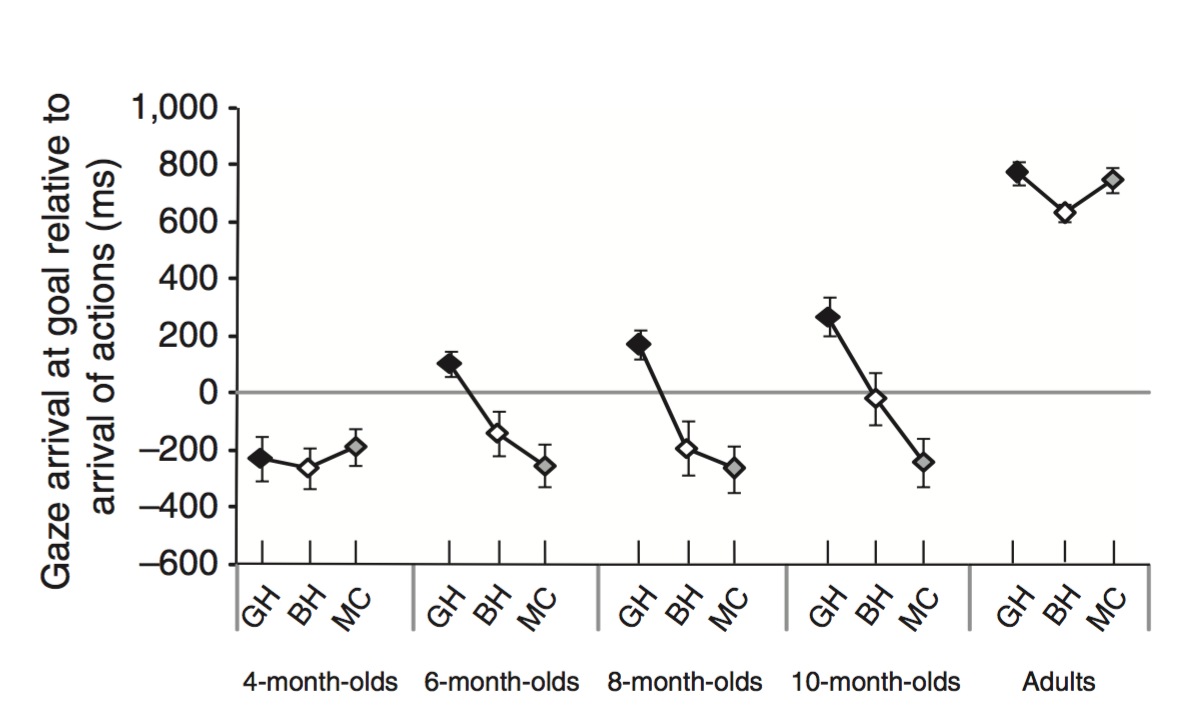 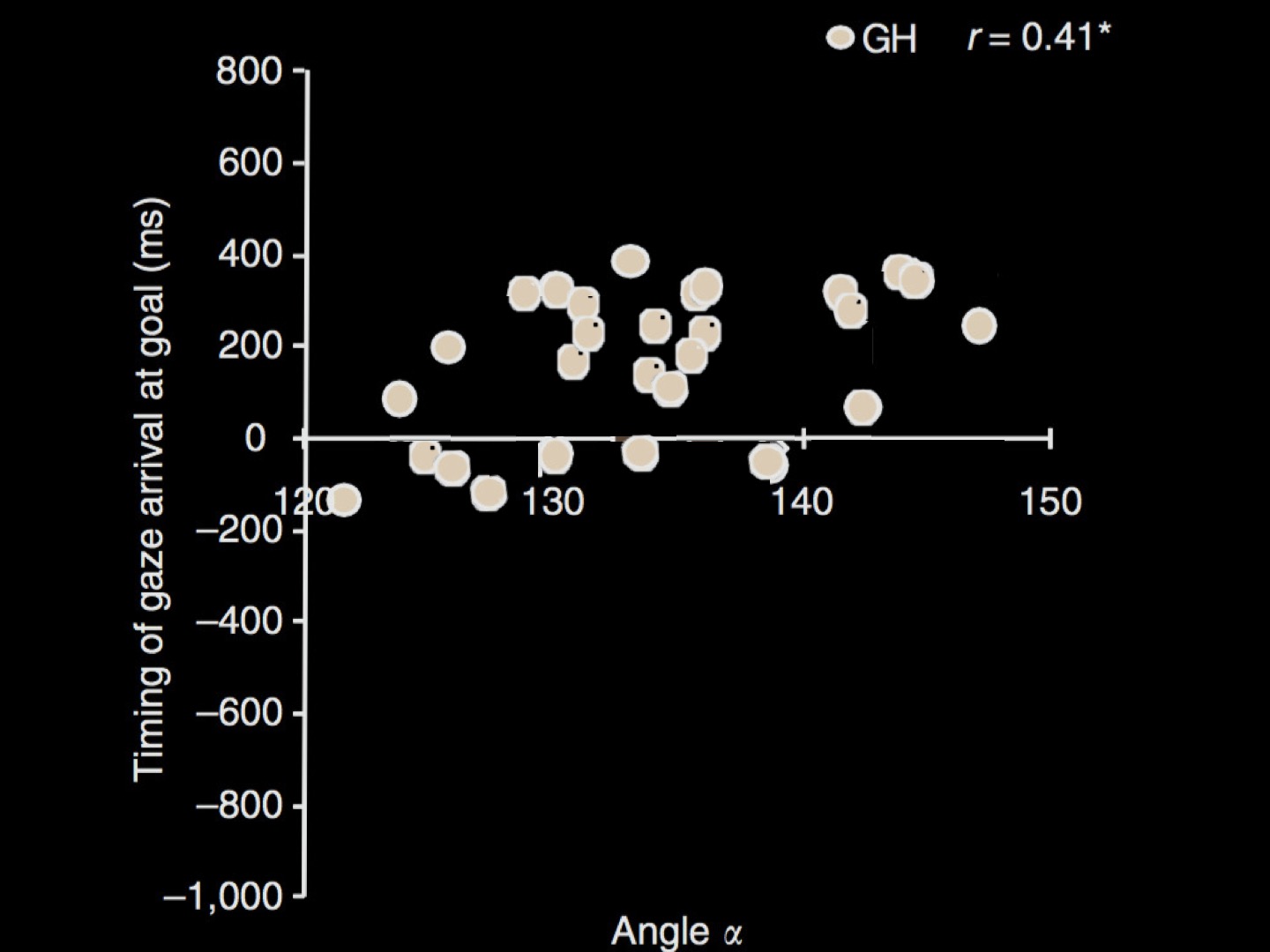 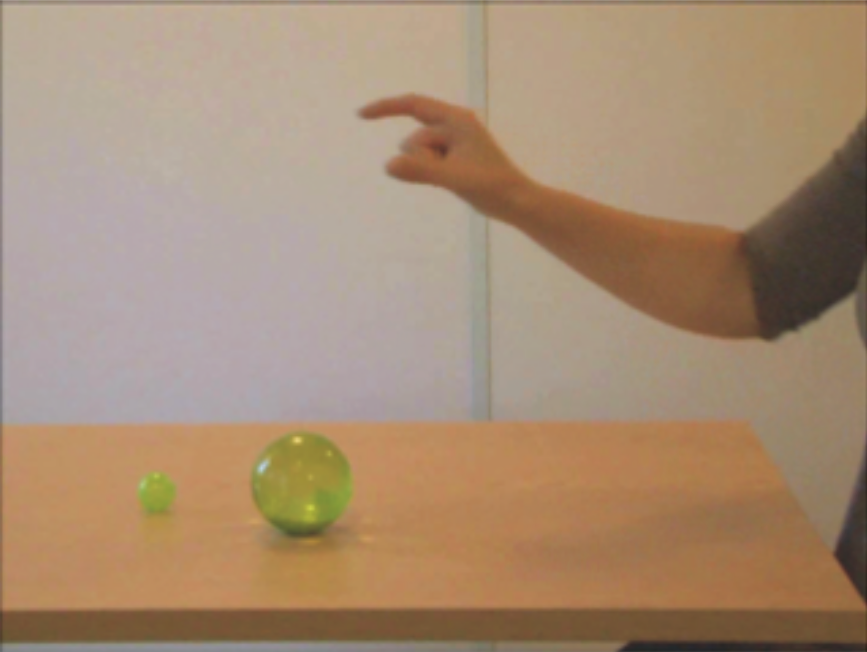 Further support for a link between action performance and goal tracking comes from a developmental study by Ambrosini et al which studied whether proactive gaze in infants is influenced by pre-shaping of the hand, and, in particular, whether it is influenced by precision grips. 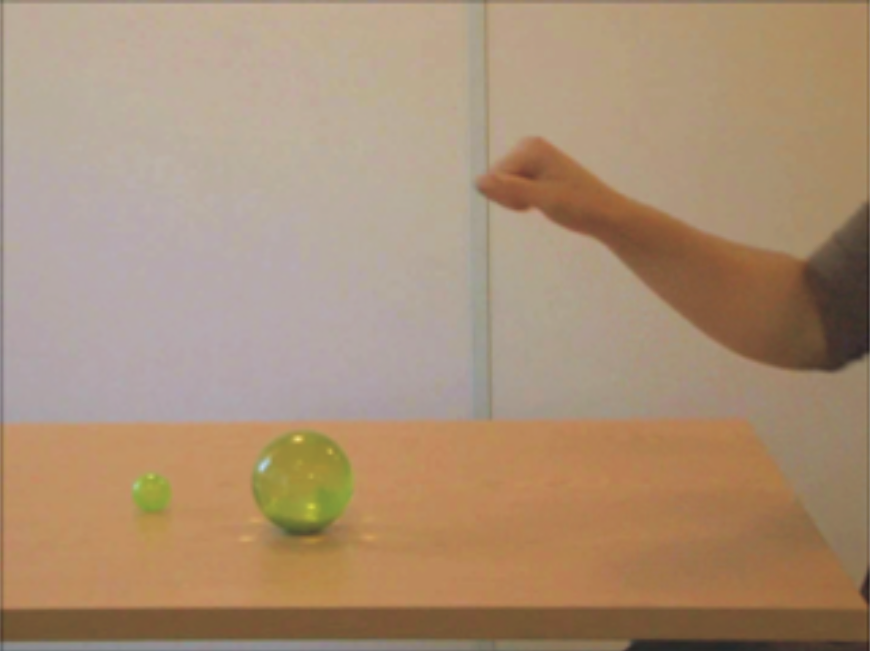 By using no shaping (a fist), Ambrosini et al could treat sensitivity to whole-hand grasp and precision grip separately. 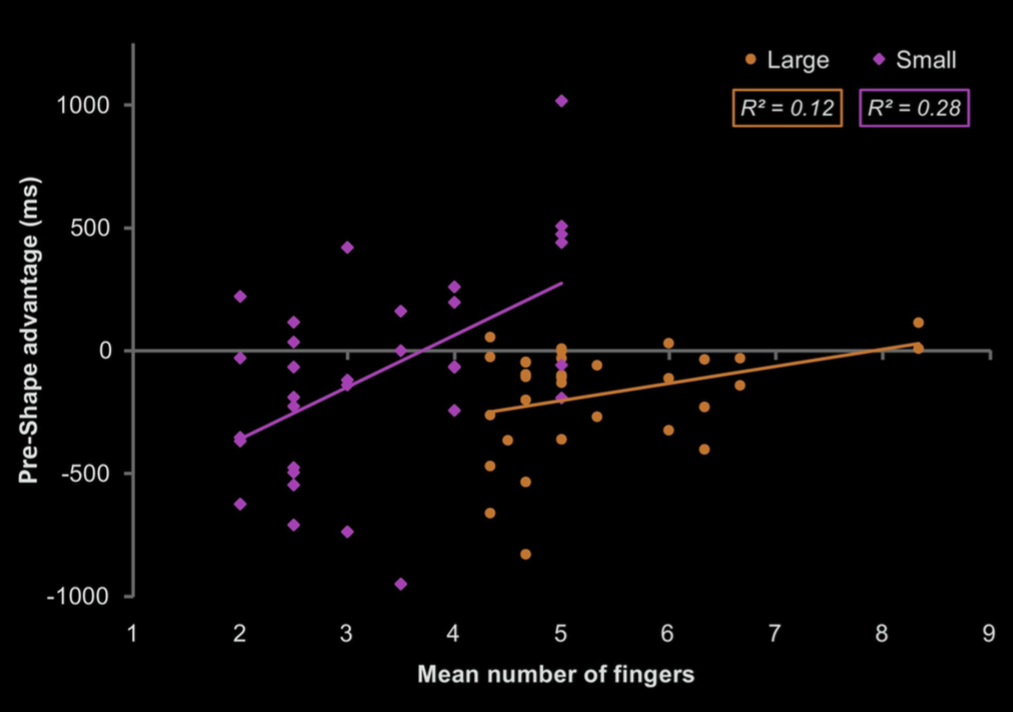 ‘infants’ ability to perform specific grasping actions with fewer fingers directly predicted the degree with which they took advantage of the availability of corresponding pre-shape motor information in shifting their gaze towards the goal of others’ actions’ \citep[p.~6]{ambrosini:2013_looking}.

Further, changing from a bodily action to the operation of a mechanical claw (say) undermines the goal tracking effect.
So Kanakogi & Itakuar, 2011 make two points: (i) goal-tracking depends on action capabilities; and (ii) only works for events involving biomechanically similar affectors 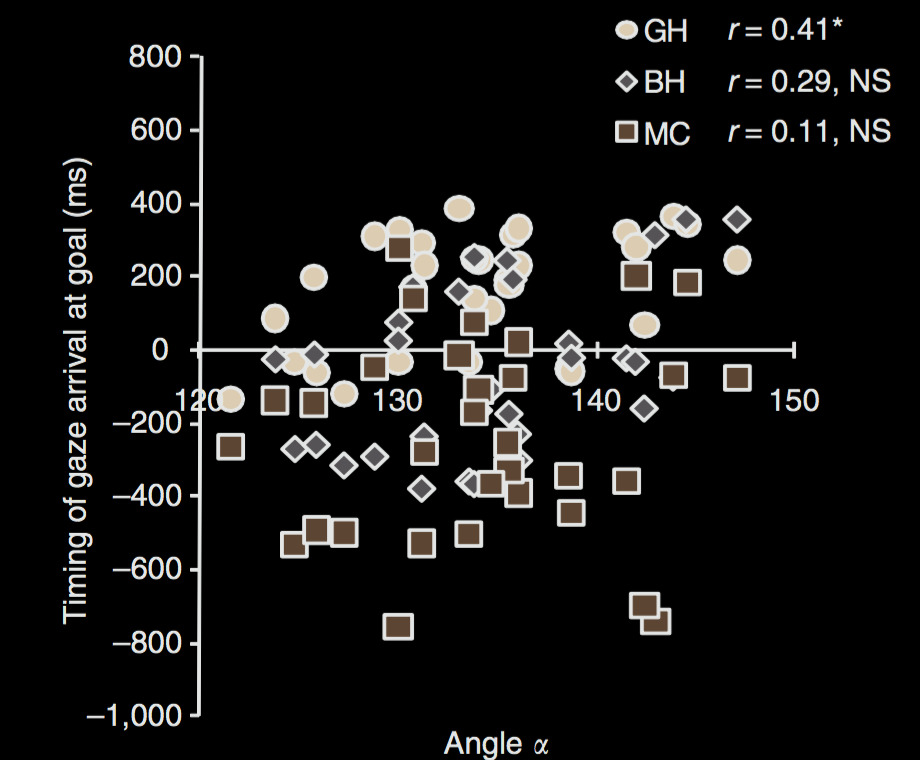 If infants can only track goals of actions they can perform, what happens if you intervene on their abilities to act? 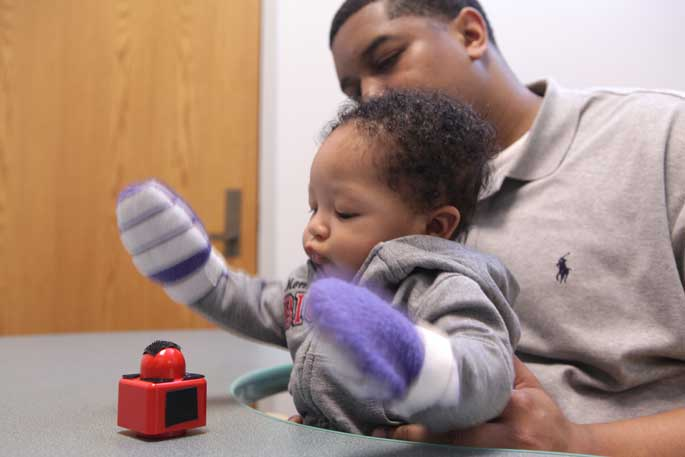 In this study, I think infants wore the mittens for just 200 seconds (so the play sessions were much shorter than in Needhman et al, 2002).
The observation was based on this study, which we saw earlier 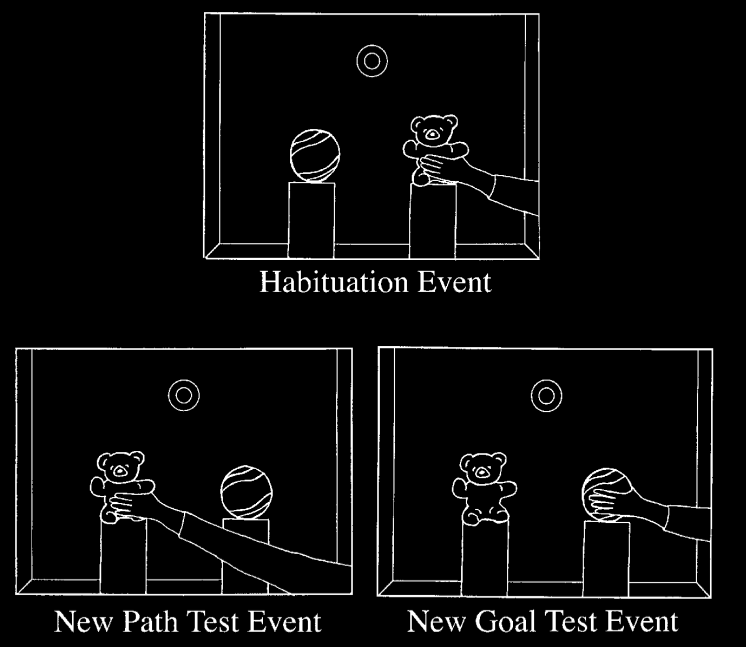 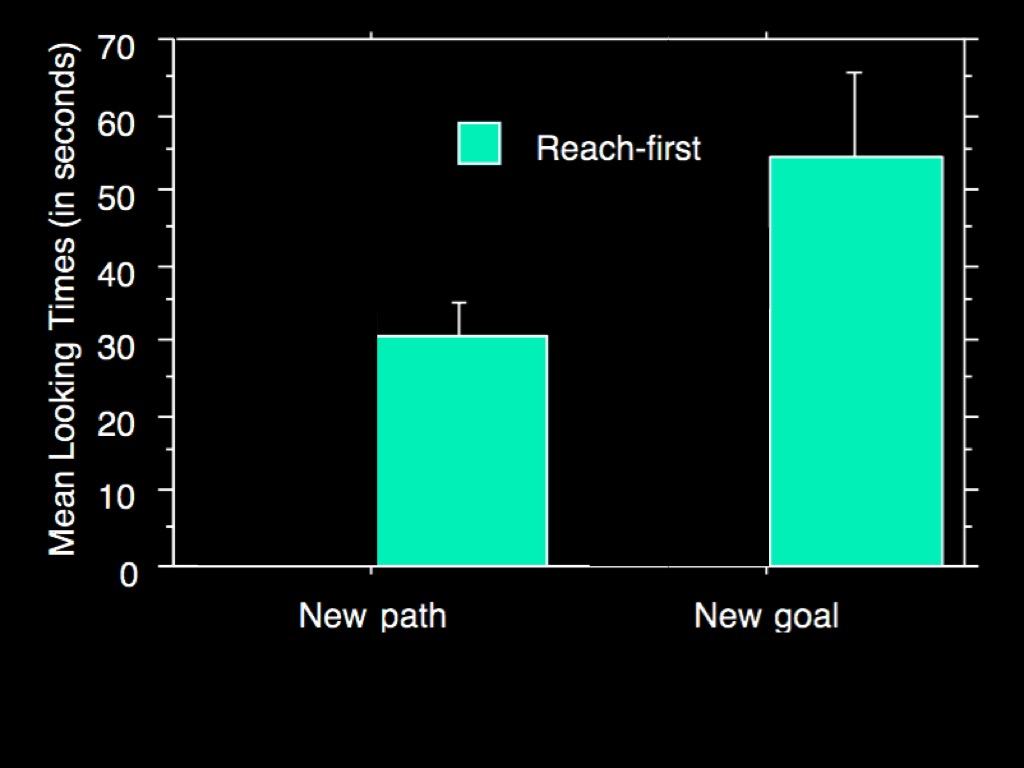 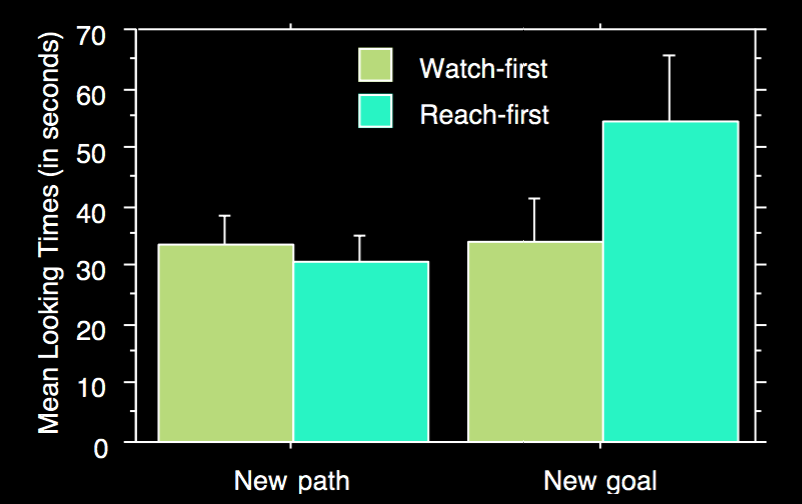 The results show that infants who played wearing the mittens first were more attentive to the goal.
From at least three months of age, some of infants’ abilities to identify the goals of actions they observe are linked to their abilities to perform actions \citep{woodward:2009_infants}.
But one potential objection to this study concerns observation vs performance. The infants who played wearing sticky mittens first had spent longer observing actions by the time it came to the violation of expectations trial. Could it be observation of action (including one’s own) rather than performance that matters?
In adults, tying the hands impairs proactive gaze \citep{ambrosini:2012_tie}; in infants, boosting grasping with ‘sticky mittens’ facilitates proactive gaze (\citealp{sommerville:2005_action}; see also \citealp{sommerville:2008_experience}, \citealp{ambrosini:2013_looking}).

nb something gets stuck to the mittens; it's not really grasping! 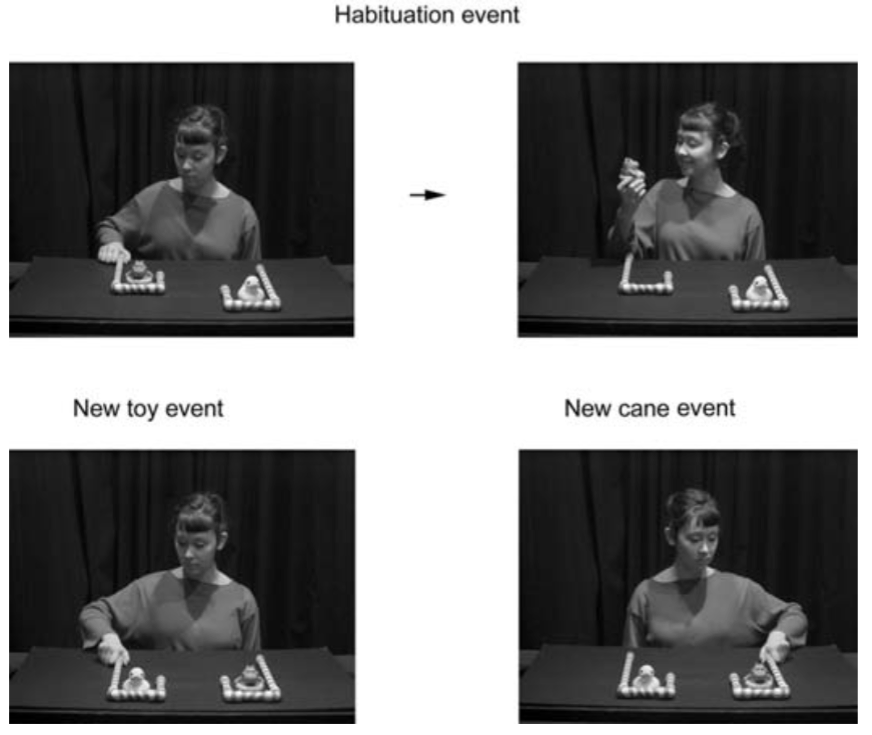 To address this issue, \citet{sommerville:2008_experience} did a study in which one group had observation while the other group had performance. The participants were 10-month-old infants this time.
The materials were a bit different: so that training vs observation could be as similar as possible with respect to the causal structure exposed, there was a hook to get an object. 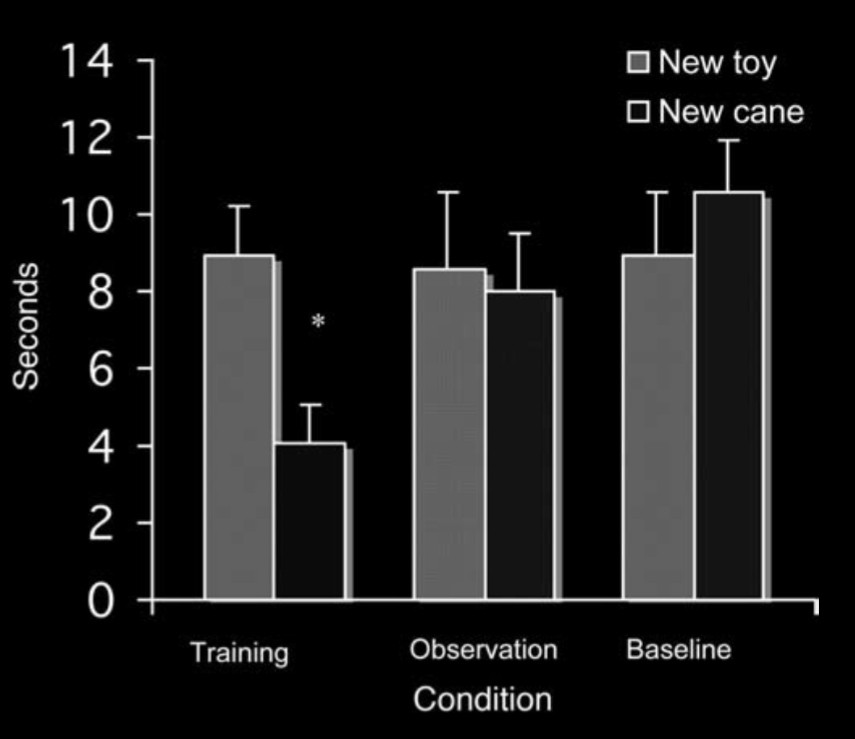 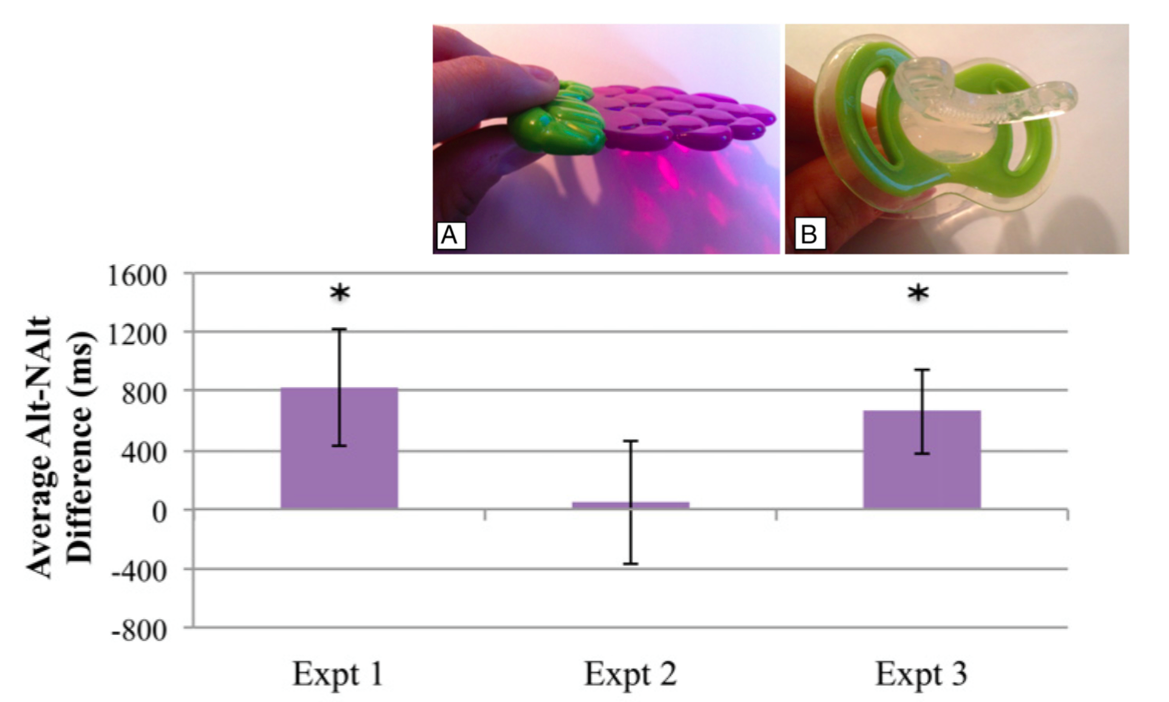 Experiment 1 : shows that 6-month-old infants can distinguish a phonetic contrast they have never heard before (one that occurs in Hindi but not their linguistic environments.) (The contrast used was the Hindi dental /d/̪ versus retroflex /ɖ/ distinction.)
These graphs show a difference in mean looking time between cases in which phonemes are alternated and cases in which they are not. (Iff infants distinguish, they should find the alternating phonemes more interesting.)
Experiment 2: but not when they have a tongue-controlling dummy in their mouths
Experiment 3: but yes when they have a dummy which leaves the tongue free.

I don’t think we have found strong evidence for this limit. What we can conclude, more weakly, is that there is some limiting relation linking goal-tracking and abilities to act.

Why is this true? Why is goal-tracking in infants (and adult) limited by their abilities to act? On the Simple View, goal tracking is a matter of thinking and reasoning about the best means to perform an action. On this View, there’s no obvious reason why your goal-tracking should be limited by your abilities to act in this way.
Although I can’t jump over a house, I can perfectly well think about different ways to do so and distinguish better and worse approaches, at least to some extent.