Minimally, an account of joint action should explain what distingiushes joint action from parallel but merely individual action.

What distingiushes joint action from parallel but merely individual action? 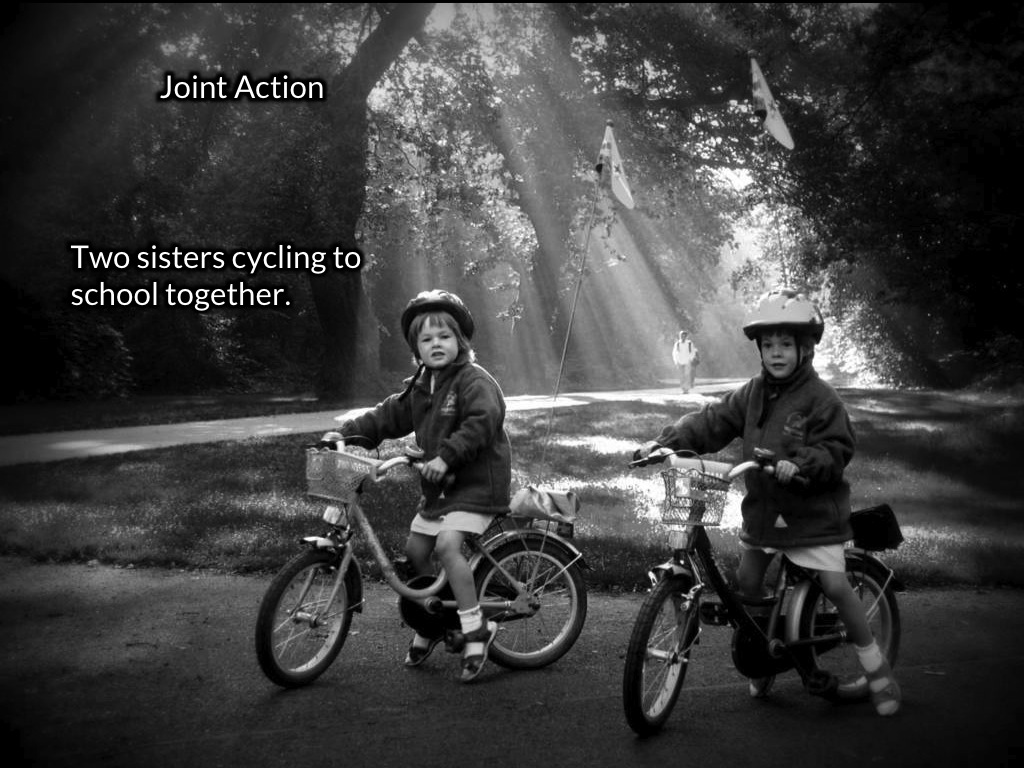 A paradigm case of joint action would be two sisters cycling to school together. 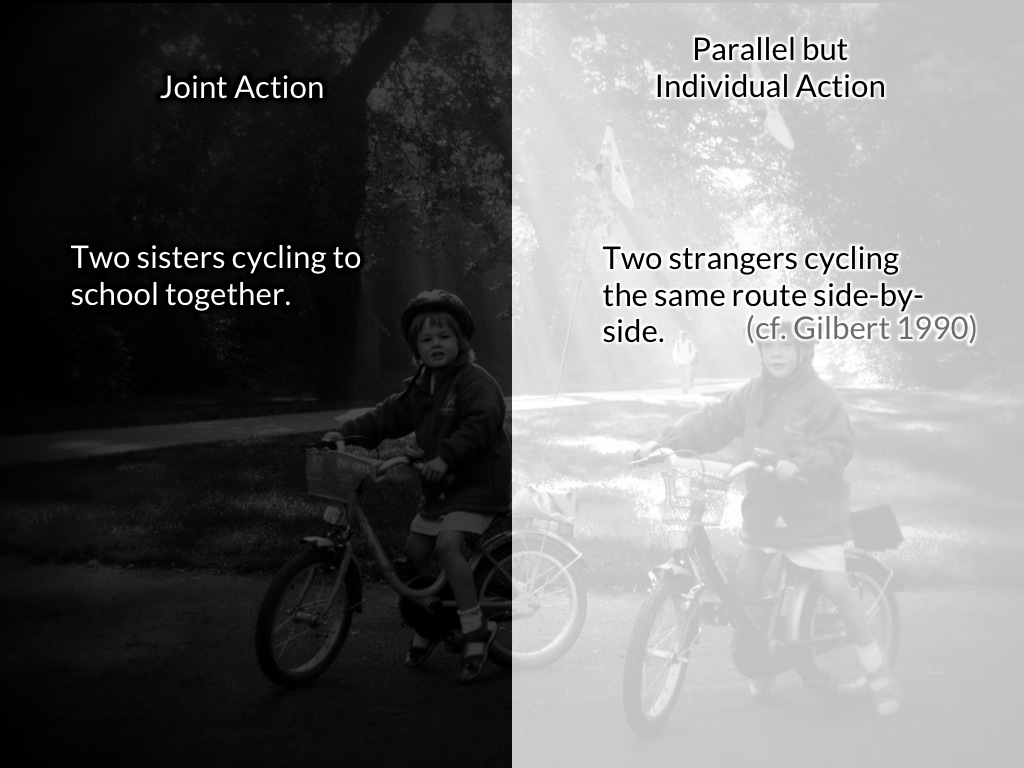 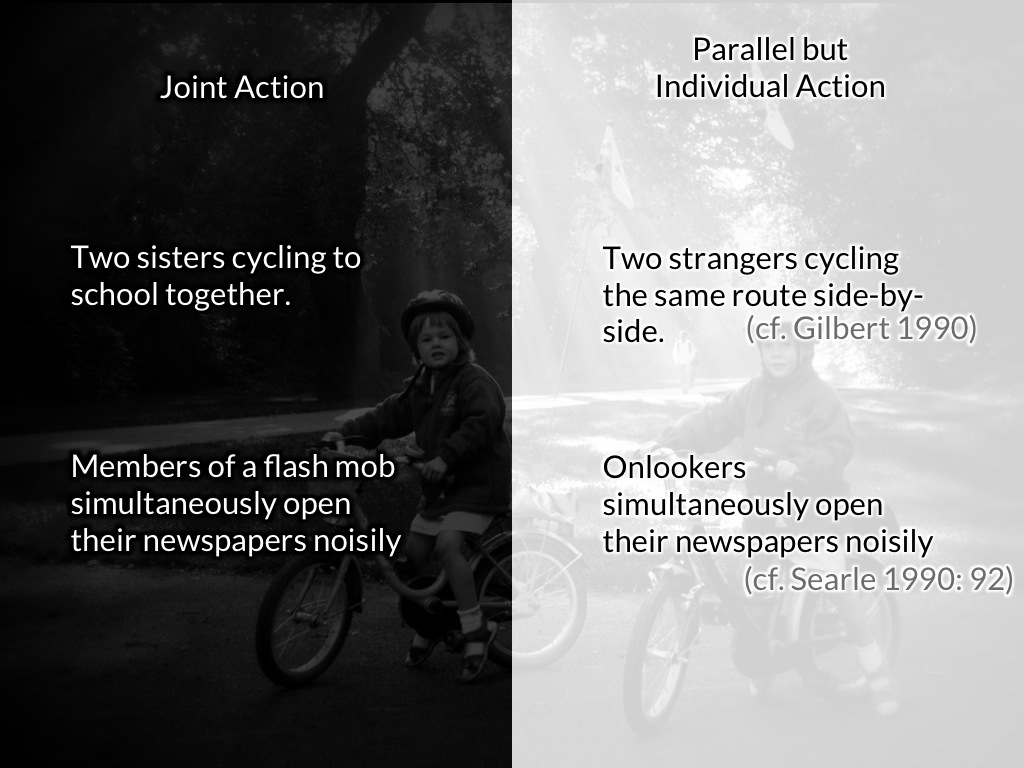 Or, to take another paradigm case,
when members of a flash mob in the Central Cafe respond to a pre-arranged cue by noisily opening their newspapers, they perform a joint action.
But when someone not part of the mob just happens to noisily open her newspaper in response to the same cue, her action is not part of any joint action.%
\footnote{
See \citet{Searle:1990em}; in his example park visitors simultaneously run to a shelter, in once case as part of dancing together and in another case because of a storm.
Compare \citet{Pears:1971fk} who uses contrast cases to argue that whether something is an ordinary, individual action depends on its antecedents.
} 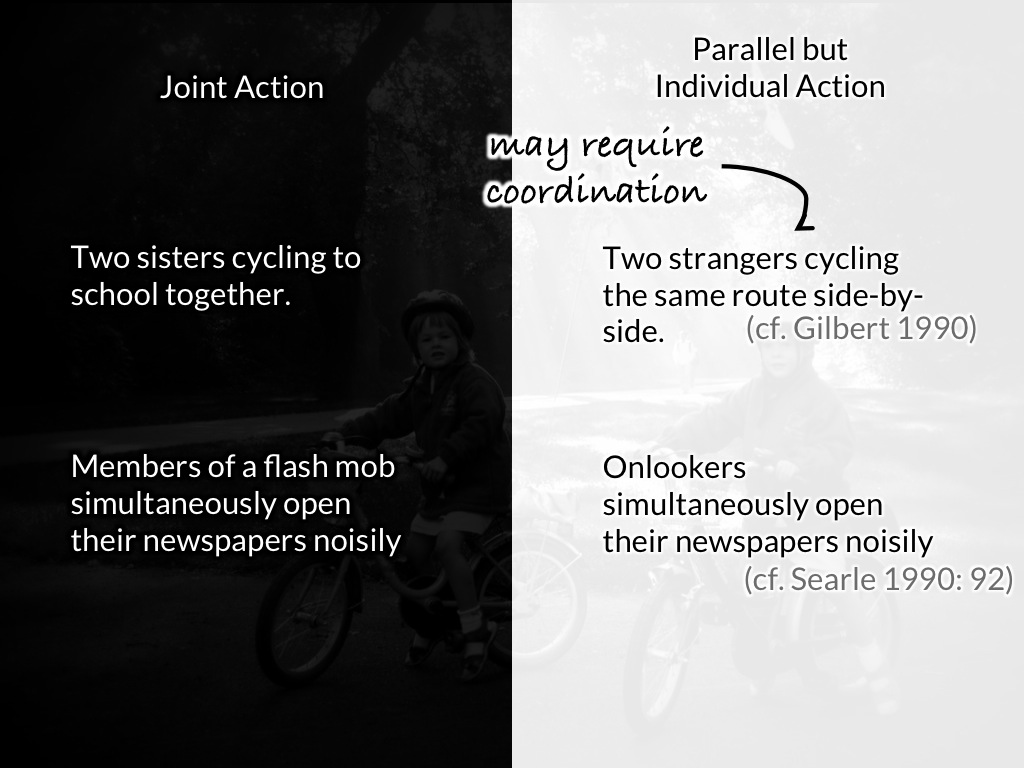 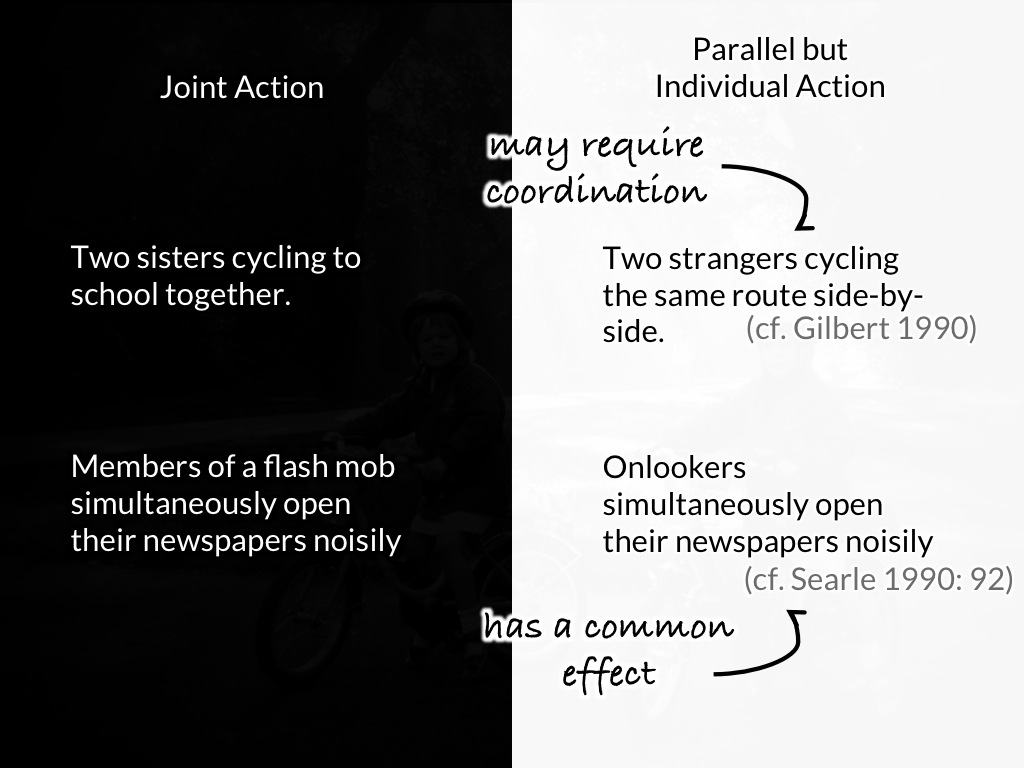 ‘the key property of joint action lies in its internal component [...] in the participants’ having a “collective” or “shared” intention.’

‘Shared intentionality is the foundation upon which joint action is built.’ 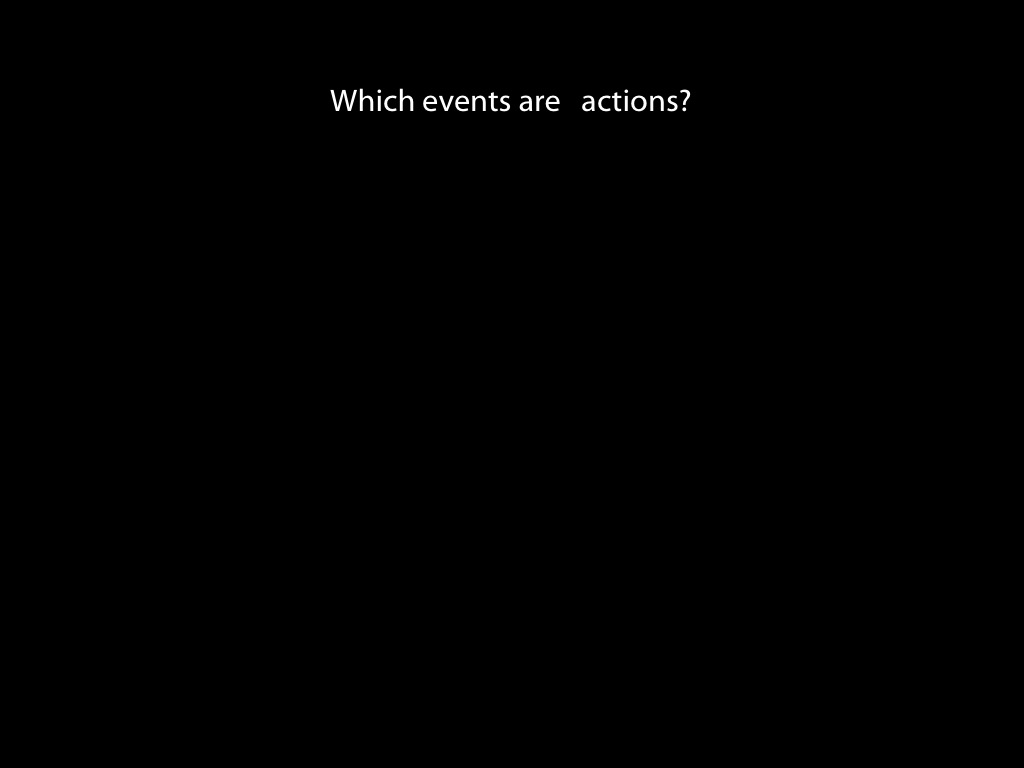 It is helpful to draw a parallel with individual action ... Consider Davidson’s question is, Which events are actions?
Suppose we ask, Which events are actions? (This is Davidson’s question.) Here the contrast is with things that merely happen to an agent. To illustrate, we might be struck by the contrast between your arm being caused to go up by forces beyond your control, and the action you perform when you raise your arm. Or we might be struck by the contrast between mere reflexes, such as the eyeblink reflex, and the action of blinking your eyes (perhaps to greet someone). 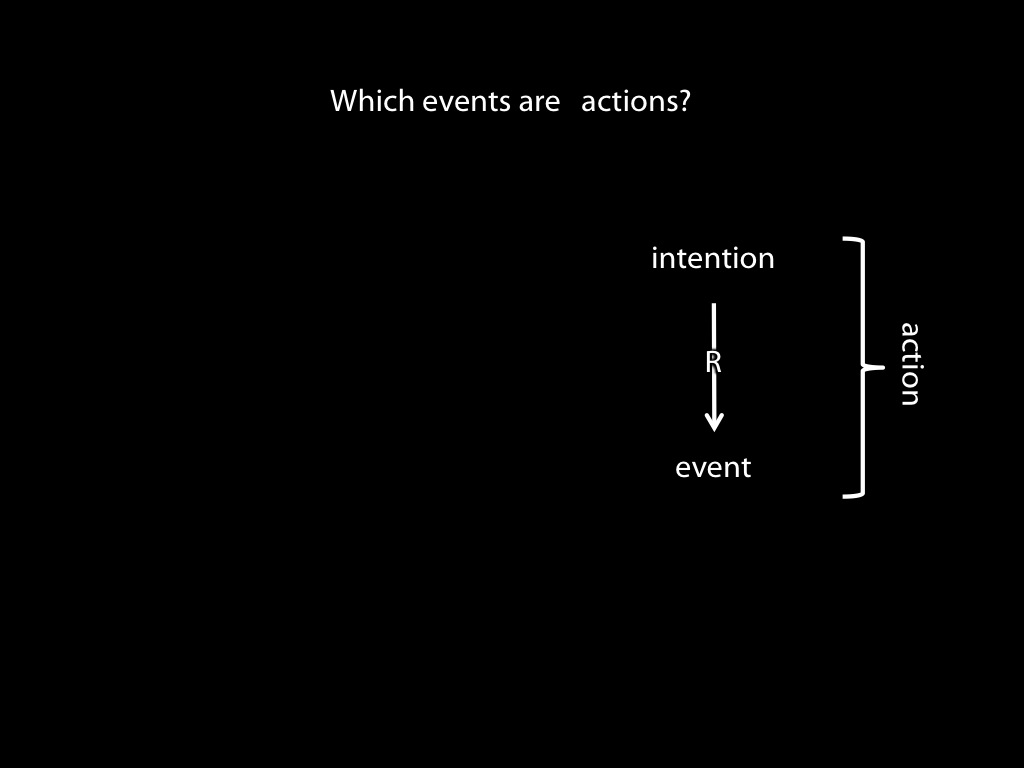 One quite natural and certainly influential way to answer this question is by appeal to intention. The idea is that events are actions in virtue of being appropriately related to an intention of yours.
Note that I’m not confidently endorsing this answer; in fact I’m not even confident that the question is ultimately the right question to ask. I’m just suggesting this is a reasonably straightforward starting point for us. 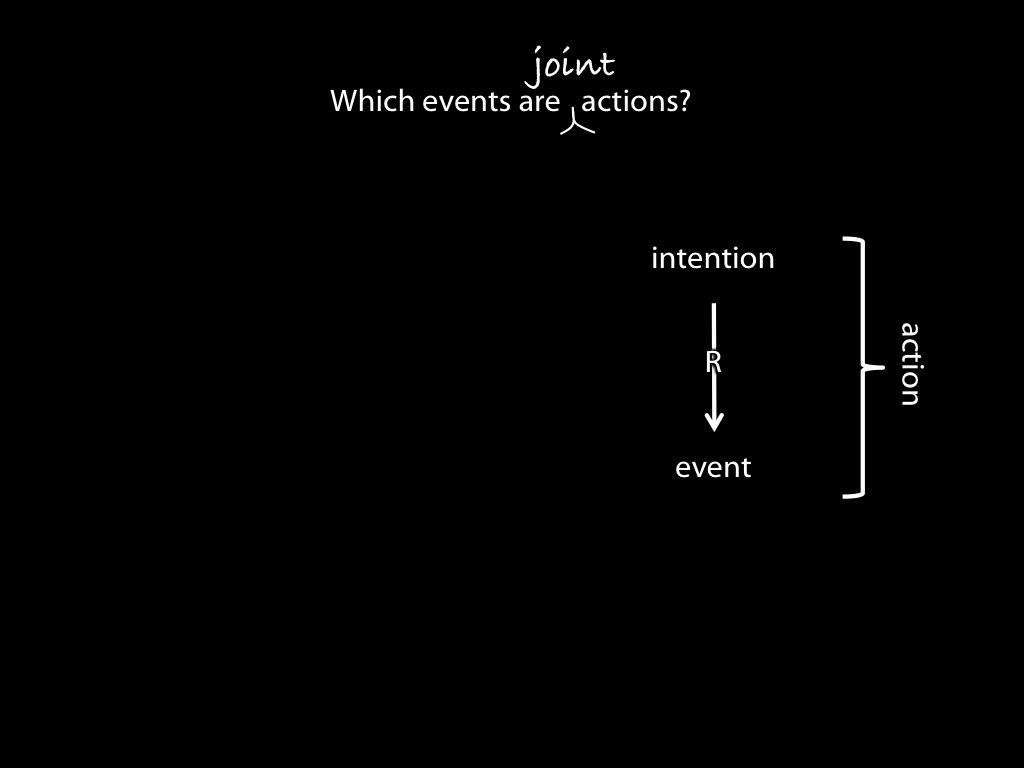 This question about ordinary, individual action is parallel to our current working question about joint action, which we might phrase as ‘Which events are *joint* actions’ ... 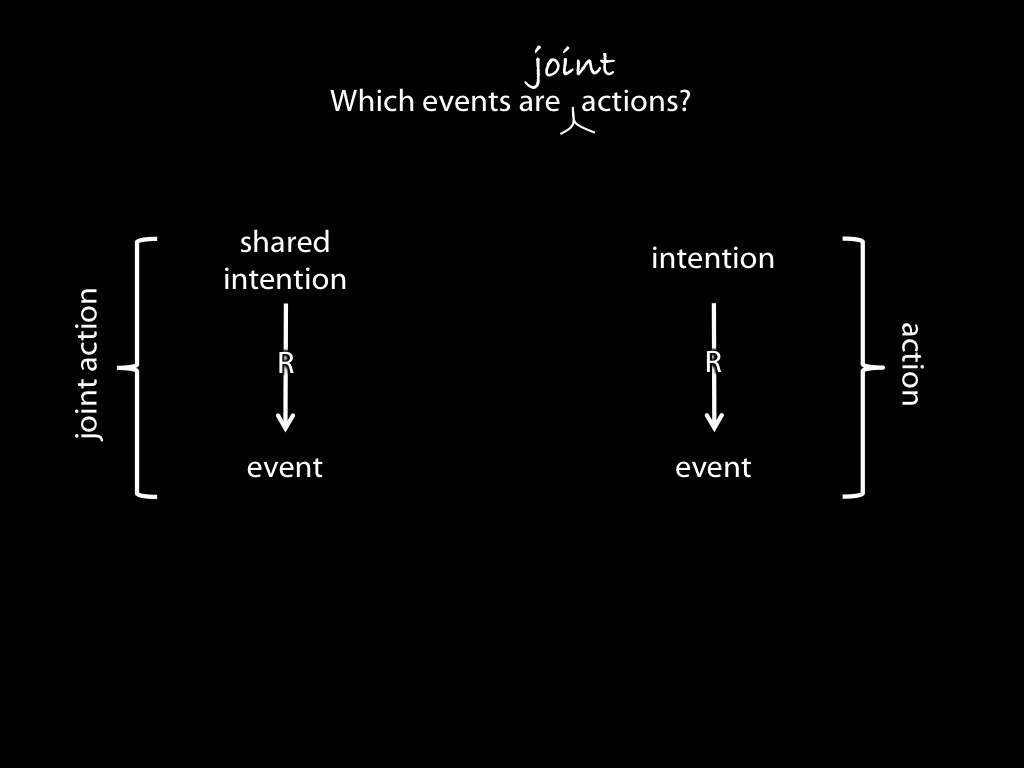 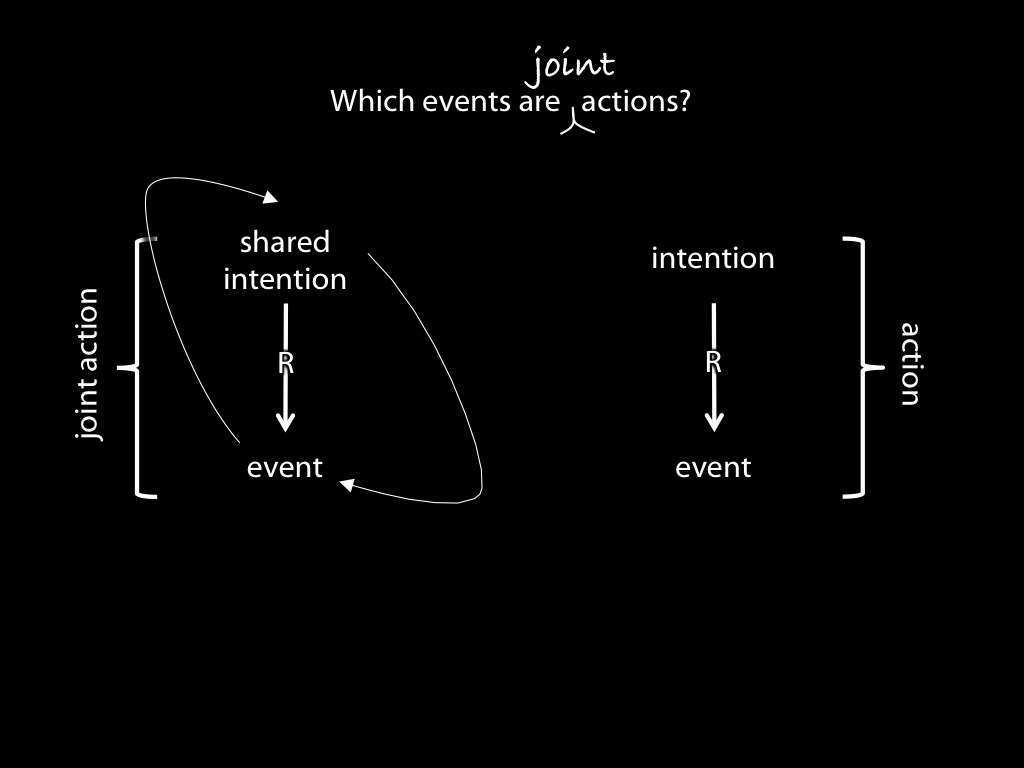 In making this idea more precise, Bratman proposes sufficient conditions for us to have a shared intention that we J ...

... the idea is then that an intentional joint action is an action that is appropriately related to a shared intention. 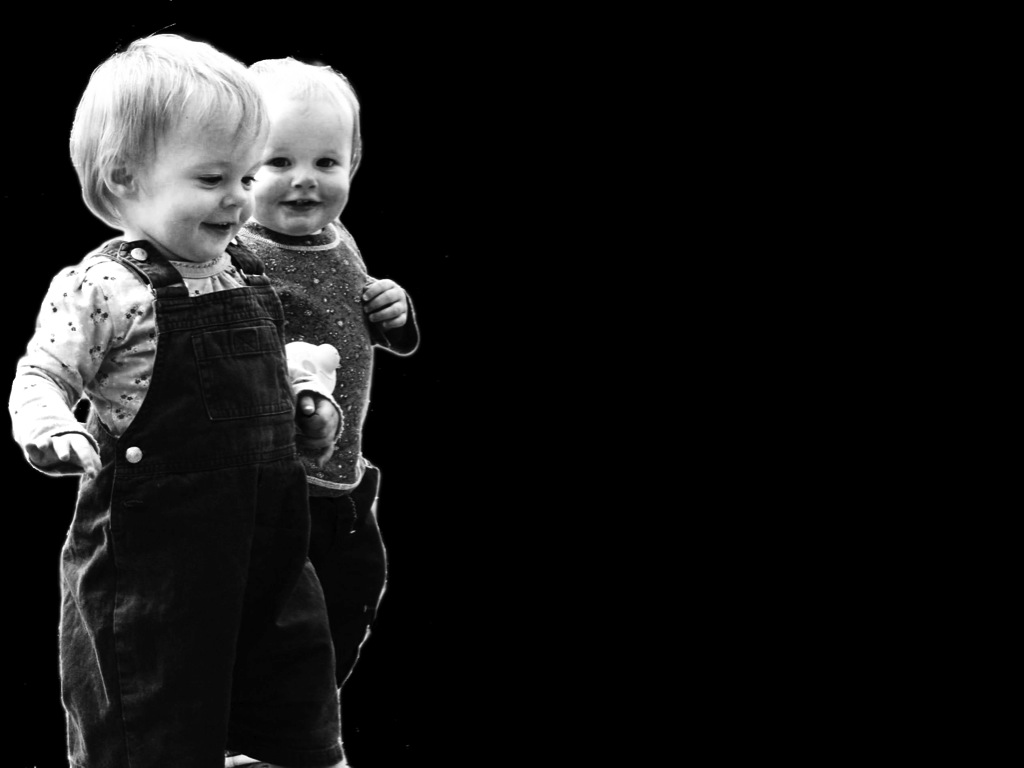