Recall that the question for this course is ... Our focus is on two breakthrough sets of findings. One concerns core knowledge, the other social interaction.

Take core knowledge first.
We will see that infants can tackle physics, number, agents and minds thanks to a set of innate or early-developing abilities, often labelled `core knowledge'.

We don't understand it.

Several features distinguish core knowledge from adult-like understanding: its content is unknowable by introspection and judgement-independent; it is specific to quite narrow categories of event and does not grow by means of generalization; it is best understood as a collection of rules rather than a coherent theory; and it has limited application being usually manifest in the control of attention (as measured by dishabituation, gaze, and looking times) and rarely or never manifest in purposive actions such as reaching.

Now, what about social interaction? First let me mention what people say about it.
Preverbal infants manfiest a surprising range of social abilities. These include imitation, which can occur just days and even minutes after birth (Meltzoff & Moore 1977; Field et al. 1982; Meltzoff & Moore 1983), imitative learning (Carpenter et al. 1998), gaze following (Csibra & Volein 2008), goal ascription (Gergely et al. 1995; Woodward & Sommerville 2000), social referencing (Baldwin 2000) and pointing (Liszkowski et al. 2006). Taken together, the evidence reveals that preverbal infants have surprisingly rich social abilities.
Perhaps the best evidence how sophisticated infant social interaction can be comes from studies of language creation. (This will be a key topic when we come to study knowledge of language, but let me give you a tiny preview.)
Children with no experience of others' languages can create their own languages. We know this from studies of profoundly deaf children brought up in purely oral environments and therefore without experience of language \citep{Kegl:1999es,Senghas:2001zm,Goldin-Meadow:2003pj}. Individually or in groups these children invent their own signed languages. These languages are not as rich as those of children with experience of other people's languages but they have all of the essential features of language including lexicons and syntax (*refs: Goldin-Meadow 2002, 2003). The children invent gesture forms for words which they use with the same meanings in different contexts, they adopt standard orderings for combining words into sentences, and they use sentences in constructing narratives about past, present, future and hypothetical events (*ref: Goldin-Meadow 2003: 170).
But it is not just children in extreme circumstances that create words. Children in ordinary environments will create their own words before they learn to use those of the adults; when children start speaking, it is often the adults who are learning new words. (‘Some children are so impatient that they coin their own demonstrative pronoun. For instance, at the age of about 12 months, Max would point to different objects and say “doh?,” sometimes with the intent that we do something with the objects, such as bring them to him, and sometimes just wanting us to appreciate their existence’ (\citealp[p.\ 122]{Bloom:2000qz}; see further \citealp{Clark:1981bi,Clark:1982hj}).)
And even where children have mastered a lexical convention, they will readily violate it in their own utterances in order to get a point across. (‘From the time they first use words until they are about two or two-and-a-half, children noticeably and systematically overextend words. For example, one child used the word “apple” to refer to balls of soap, a rubber-ball, a ball-lamp, a tomato, cherries, peaches, strawberries, an orange, a pear, an onion, and round biscuits’ \citep[p.\ 35]{Clark:1993bv}.)

The idea, in essence, is that cognitive development is a kind of (re)discovery. (But not exactly as Plato's myth had it.)
How do humans get from core knowledge to knowledge knowledge? I want to suggest that it involves a process of (re)discovery. I don't think it's a case of partial knowledge becoming gradually more complete, or of the core knowledge providing content for later knowledge states. Rather, I think the core knowledge shapes the subject's body, behaviour and attention in ways that facilitate discovery at the next stage.
And, most importantly, core knowledge enables increasingly sophisticated forms of social interaction. It is these social interactions---together with the bodily, behavioural and mental changes---that enable subsequent re-discoveries. So, on this view, the role of some early-developing abilities in explaining the later acquisition of conceptual understanding does not involve direct representational connections; rather the early developing abilities facilitate or enable social interaction, influence attention and inform behaviour; and these influences facilitate development. 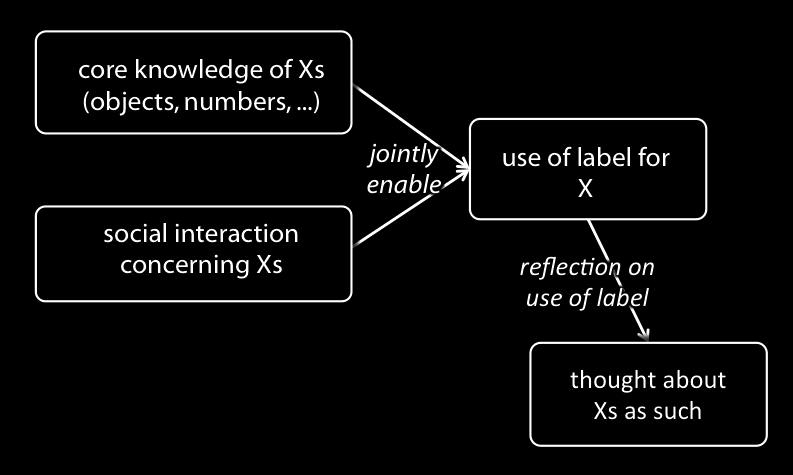 To make this vague idea slightly more concrete, let me zoom in. I think having verbal labels for things sometimes helps with acquiring concepts of them. Now this sounds paradoxical. Doesn't having a label for something mean being able to label correctly? And how could you label correctly without the corresponding concept? My suggestion is that having core knowledge is not having a concept (many disagree); but core knowledge could underpin your correct use of a label. Now labels are acquired through social interaction, or so I suggested earlier. Hence the picture.
Now this picture needs two qualifications. First, it's missing some details, and these details will vary from case to case (what's true of knowledge of objects might not be true of knowledge of number). Second, the picture might be completely wrong. But even if the picture is wrong, I'll bet that social interaction and core knowledge are both essential for explaining how humans come to know things. So I don't claim to know how these two are necessary, only that they are. In fact my aim isn't primarily to explain to you how these two factors explain the origins of mind. Instead my hope is this. I'll give you the background on social interaction and core knowledge. And you'll tell me how these two (or perhaps other factors) are involved in explaining how humans come to know things about objects, colours, actions, numbers and the rest.