... So which joint actions can one- and two-year-olds perform?

Methods: still face; replay (infants detect whether caregiver reacts, so are less satisifed with a replay).
\citet[p.~196]{brownell:2011_early} comment: ‘infants become progressively tuned to the timing and structure of dyadic exchange’

\citet[p.~197]{brownell:2011_early} comment: ‘adult-infant dyadic interactions expand to include objects, events, and individuals outside of the dyad (Moore and Dunham 1995)’

\citet[p.~197]{brownell:2011_early} comment: ‘Eventually, infants begin themselves to initiate joint action with adults and to respond in unique ways when adults violate their expectations for participation in the joint activity. For example, if a parent becomes distracted during peek-a-boo and fails to take her turn, 12-month olds may try to re-start the game by vocalizing to the adult or by re- enacting a well-rehearsed part of the game such as placing the cloth over their own face and waiting. One-year olds also begin to point to interesting sights and events to share their interest and affect and they expect adults to respond appropriately by looking (Liszkowski, et al 2006).’
‘infants learn about cooperation by participating in joint action structured by skilled and knowledgeable interactive partners before they can represent, understand, or generate it themselves. Cooperative joint action develops in the context of dyadic interaction with adults in which the adult initially takes responsibility for and actively structures the joint activity and the infant progressively comes to master the structure, timing, and communications involved in the joint action with the support and guidance of the adult. ... Eager participants from the beginning, it takes approximately 2 years for infants to become autonomous contributors to sustained, goal-directed joint activity as active, collaborative partners’ \citep[p.~200]{brownell:2011_early}.
‘Without the structure and scaffolding provided by the expert adult partner, 1-year-old children are unable to generate and sustain joint action with each other in the service of an external goal. By age two, however, they can do so readily, even with unfamiliar agemates and on novel, unfamiliar tasks’ \citep[p.~204]{brownell:2011_early}. 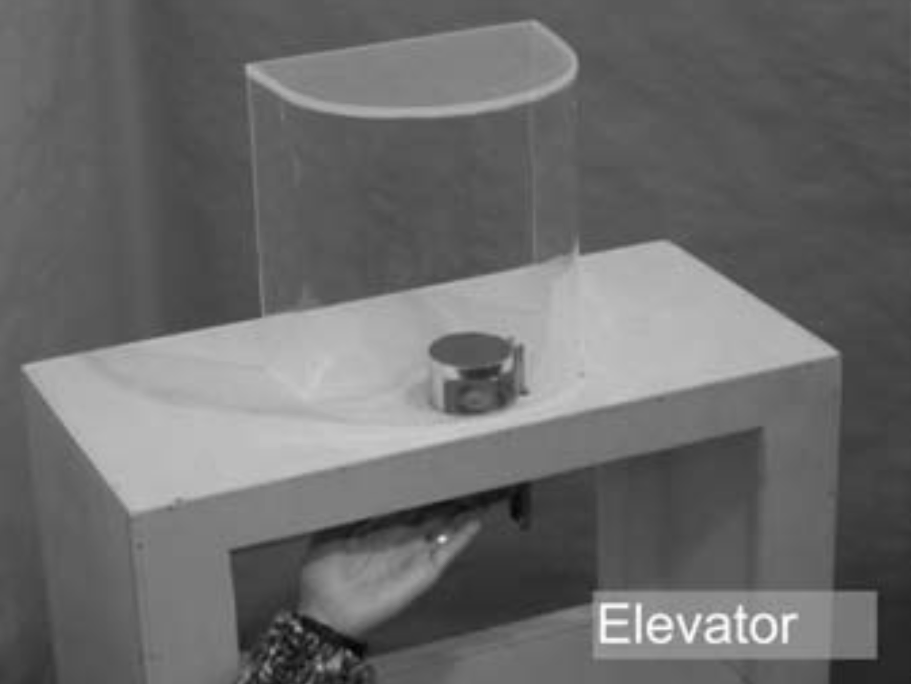 Ages: 14, 18 and 24 months.
Elevator task: free an object from a cylinder. Two roles. Role A: position yourself in the right location to retrieve the target object. Role B: push up the cylinder and hold it in place while another retrieves it. 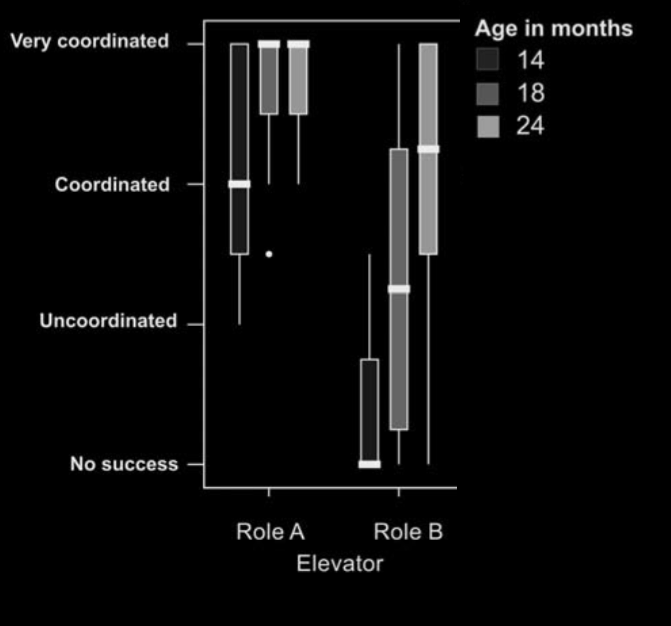 ‘The 14-month-olds of this study displayed coordinated behaviors in the elevator task Role A of positioning themselves in the right location and retrieving the target object from the cylinder when the partner pushed it up, but they had major problems performing Role B, pushing the cylinder up and holding it in place until the partner could fetch the object. If they pushed up the cylinder at all, they would repeatedly drop it when the other person was just about to take the object out’ \citep{warneken:2007_helping}.
\citet[p.~200]{brownell:2011_early} comment: ‘Across these non-routine tasks, 18-month olds’ behavior with the adult partner was rated as predominantly “uncoordinated” (vs. “coordinated” or “very coordinated”) and the children exhibited “low” cooperative engagement (vs. “medium” or “high”). On those tasks requiring children to anticipate the partner’s actions and to adjust their behavior accordingly, 18-month olds’ performance did not differ from chance. By age two, children operated at “medium” levels of cooperative engagement and were above chance in anticipating and coordinating their behavior with the adult.’
‘social coordinations show a marked improvement between children at 14 and 18 months of age’ \citep{warneken:2007_helping}.

In the first and second years of life,

there is joint action

but it does not appear to involve planning agency

the sort of joint actions

infants perform in the first and second years of life.